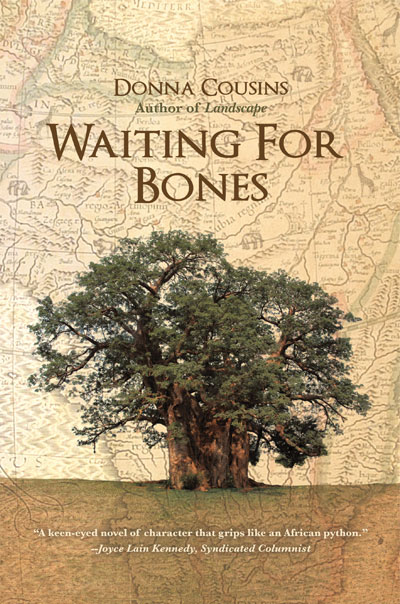 Available at Amazon, Barnes & Noble, Google Play, and other local and on-line booksellers.

Four friends on an African safari must transform themselves from tourists into agents of their own survival. Dehydration, sunstroke, savage vegetation, and Africa’s most fearsome predators—some of them human—threaten at every turn. As the four come face-to-face with the hazards and living riches of one of the last pristine environments on Earth, they make life-changing discoveries about their partners and themselves.

A taut, introspective thriller that mixes detailed survivalist fare and character study with aplomb, expertly framed by a vibrant setting.

I have been on safari, but by Cousins’ deft hand I have seen, heard, and smelled the bush more acutely while sitting at home in my easy chair.

From Waiting For Bones

Then he stepped down from the Land Cruiser and set off on a path so sketchy it might not have been a path at all. The four passengers, seated two-by-two in ascending rows behind the front seat, watched puffs of dust explode behind his boots as he stalked away. Bones, the guide, had never left them alone out there—not for a minute.

They were parked beneath a colossal baobab tree that thrust itself up from parched sub-Saharan earth. The sun had only moments before breached the horizon and begun its assault on the cold morning air. Sitting in the roofless, wide-open vehicle in zipped up jackeds they would soon fling away, the travelers stared at their leader’s rapidly receding back, alert for any clue to his unexplained departure.

The land around them appeared spare and endless. Random clusters of flat-topped vegetation measured a foot in height—or twenty—and stood a few yards away—or a mile—perspective being the first casualty of a vast, alien wilderness. To gaze into the distant dawn was to feel as small as an insect. Yet a short drive in any direction could change the landscape entirely, from wide open bushveld to dense, riverine woodland or muddy, croc-infested delta.

“He’s going for a smoke,” Todd said, squinting into the middle range. He was leaning forward with his kneecaps hard against the back of the vacated driver’s seat. “Bones smokes, you know.”